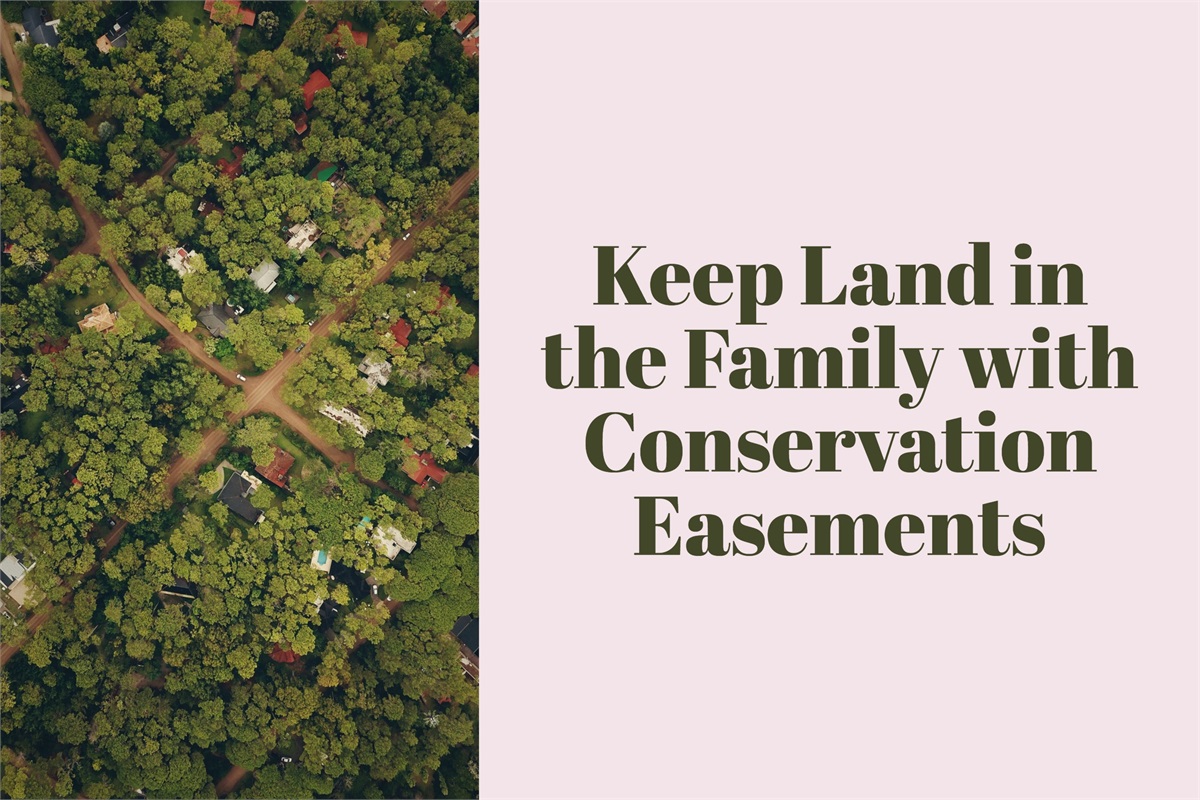 Keep Land in the Family with Conservation Easements

A conservation easement is a voluntary legal agreement between a landowner and another party, usually a government agency or nonprofit trust, which restricts the use of the land in perpetuity, even as the land remains the private property of the landowner and can be sold or passed on to heirs. In addition to enabling farmers, ranchers, and other large landowners to specify how they wish the land to be used, conservation easements can be helpful as a means of reducing income taxes and lowering the value of estates for tax planning purposes. In many cases, the creation of a conservation easement can avert the need of the owner or the owner’s heirs to sell or subdivide the land to cover tax liabilities after death.

Generally, a conservation easement agreement is made between a landowner and a Federal, state, or local government agency, or a qualified land protection organization, such as a land trust. While these agreements vary, they generally restrict real estate development, commercial and industrial uses, and certain other activities on the property, while preserving the land for conservation purposes specified in the agreement. The agreement may, for example, stipulate that the land is to be used for farming or forestry, as a natural habitat for wildlife, or as a scenic or recreation area accessible to the public. In some cases, the conservation easement preserves a piece of land or a building that has been certified as historic, including the historic façade of a building.

Because the land or building can no longer be used for development, conservation easements generally result in a significant reduction in the market value of the property. This difference in value is the basis for awarding tax incentives to landowners who preserve land or buildings for future generations. Under Section 170(h) of the Internal Revenue Code, landowners may be eligible for a Federal income tax deduction equal to the value of their easement donation, as determined by a qualified appraiser. The value of the easement donation is equal to the difference between the fair market value of the property before and after the easement went into effect.

The Federal income tax incentives that permitted conservation easement donors to deduct the value of their donation at the rate of 50% of their adjusted gross income (AGI) per year, and also allowed farmers and ranchers who derive 50% or more of their income from agriculture, to deduct the gift at a rate of 100% of their AGI expired on December 31, 2011. The conservation community is working on proposals for a retroactive extension to permanently expand these incentives. However, without further legislation, incentives revert to pre-2008 levels of 30% of AGI deduction for qualifying land or easement donations.

The IRS warns against abuses by some taxpayers of conservation easements, especially façade easements. In the past, appraisals have sometimes been inflated, easement restrictions have not been honored, and façades already protected by local zoning ordinances have been donated, and therefore did not qualify. In such cases, the IRS states that deductions on the proposed easements will be disallowed, and excise taxes and penalties will be imposed.

Donating a conservation easement can also be a useful estate planning tool, reducing the chances that heirs in families who are “land rich, but cash poor” may be forced to sell the land to cover the taxes owed. Because the development rights have been extinguished, the value of the land may be lower, thereby reducing the potential estate tax liability. Further, under Section 2031(c) of the Internal Revenue Code, up to an additional 40% of the value of land (but not of historic property) may be excluded from the estate when the landowner dies. The maximum amount of the exclusion is $500,000. The heirs of a landowner may also take advantage of these benefits, excluding the income tax deduction, by electing to donate a conservation easement after the landowner’s death and prior to filing the estate return. This is called a “post mortem” election.

It is important for landowners or their heirs to keep in mind that, while the conservation easement is permanent and irrevocable from the perspective of the owner, the land may still be taken by eminent domain if the government asserts that the public value of the proposed project exceeds that of the conservation interest being protected by the easement. And, while donating an easement can lower income taxes, local property taxes may not be significantly reduced if the land continues to be used for agricultural purposes.

If you are considering a conservation easement, be sure to consult a qualified tax professional to help guide you through the process.